Good morning, fellow Salon Members! Can it really have been almost a month since I last posted a Salon entry? Time does seem to be flying by these days! I spent the last week in Walt Disney World with 2 friends that I made back when we all worked for The Disney Store here in Lansing. Here is a photo of us taken with Cinderella at the castle before breakfast one morning - I think that Cinderella was a little annoyed that we were stealing the show! I'm on the left - and yes, we did all wear princess jewels to the Princess breakfast at the castle. In fact we wore them all day at the park and fun was had by all!!

We had a fantastic time! We went to each of the parks there, rode almost every ride (some favorites more than once!), saw all the night time fireworks displays that each park has and even got to see the resident Cirque du Soleil show, La Nouba.

I didn't have much time for reading while we were there, but over the course of the week I was able to read Jon Krakauer's Into the Wild for an online reading group co-hosted by my friend Gail. Into the Wild is the story of Chris McCandless, who after graduating from college decided to give away his savings and travel cross country by any means possible and at the age of 24 wandered into the Alaskan wilderness to live in a state of solitude for awhile but died of starvation nearly 5 months later. There is much speculation as to the reasons for McCandless' decision to travel, and I don't know that anyone other than McCandless will know his reasons, but the story that Krakauer tells is a very powerful one and gives what seem like very plausible explanations for his actions and subsequent death. 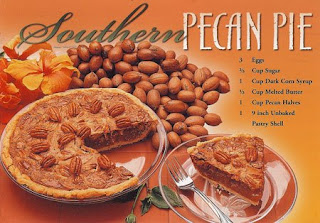 I received my first Postcrossing postcard while I was gone! It came from Kara who lives in Florida and it's a recipe for Southern Pecan Pie. Yum! Kara writes:

My name is Kara and I live in Florida. Welcome to Postcrossing! It is very fun, the different cards you receive make checking the mail a lot more exciting than just finding bills! Since this is the South, I thought this card was cute/delicious! Hope you like pie!

Pecan pie is one of my favorites, but I've never made it before. I guess I have no excuse not to now! I'll let you all know how the recipe turns out next week as I think I'll try making the pie later this week.

I think my reading this week will be very light, as my roomie and I are still in the process of packing for our move at the end of the month. I received 2 books from the library this week: Douglas Adams' Last Chance to See (this sounded like an interesting book - it's Adams' account of traveling around the world in search of animals and birds that are on the brink of extinction in their natural habitats) and Agatha Christie's Come, Tell Me How You Live (my aunt told me about this one - it's a journal that Christie kept while living in Syria while her husband was overseeing an archaeological dig). I also picked up the first of the the 39 Clues books, just to see what the premise was all about. I thought it was an interesting idea, that all the books will be written by different YA authors. I found a copy of the 10th anniversary edition of HP and the Sorcerer's Stone today, and I'm trying to decide if I should get it or not. I have to admit that I'm slightly annoyed by the fact that the original edition goes for $22 and the new 10th anniversary edition is going for $30, and all it has going for it is a new cover by Mary GrandPré.

Happy reading, everyone!
Posted by tapestry100 at 8:24 AM

Glad you're back. I've just joined Postcrossing as well. Wouldn't it be funny if we ending up sending postcards to each other?

What a great photo! It sounds like you had a nice time in Walt Disney World! I've been to Disneyland here in Anaheim countless times, but never to Disney World. Maybe someday.

I keep seeing mention of postcrossing. I may have to check it out.

Into the Wild was such a sad story. Have you seen the movie yet? It's worth seeing just for the scenery.

Have a great week!

I would love it if we ended up sending postcards to each other!

Postcrossing is fun. I think as I get more involved with it, the more fun I'll have with it.

And I haven't seen the movie yet, but it is in my Netflix queue. I've moved it up the queue a little as a result of reading the book, so I should be getting it soon!