The Iron Giant by Ted Hughes, illustrated by Laura Carlin 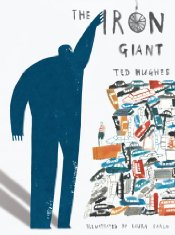 Well, this was certainly a pleasant surprise. I found this loverly illustrated gift edition at my local Indie the other evening, and I'm a huge fan of the film version directed by Brad Bird that was released several years ago so I thought I'd pick this edition up. While there are some significant changes from the book to the film (instead of saving a small town from an atomic bomb as seen in the movie, the Iron Giant helps save the Earth from a large space-dragon), the message of peace is still essentially the same. I can understand why Brad Bird made the changes to the movie that he did, as I don't think this version of the story would have translated well to film, but I like the story that Ted Hughes tells just as much. Taken on their own, each version of this story is excellent.

I'd recommend this whether or not you've seen the animated version of the story. While being a little on the idealistic side, this is still a great story about peace.


To purchase any of the books in this post, and help my local Indie bookstore, and help me buy more books, click the links above!
Posted by tapestry100 at 6:00 AM