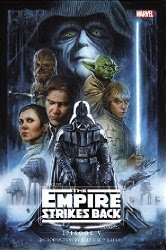 
Rebuilding an Empire, Marvel style! As the Imperial Forces regroup from their Death Star setback, they target the new Rebel Alliance base on the ice planet Hoth. Will Darth Vader's AT -AT s find Luke Skywalker, or will a wampa get Luke first? Meanwhile, feelings run high in the galaxy's greatest love triangle, bounty hunters target Han Solo's Millennium Falcon, and bloated Jabba the Hutt lies in wait. Luke seeks out the great Jedi

Master Yoda on swampy Dagobah, but the Emperor has designs on turning the young Rebel hero. As the battle begins for Skywalker's soul, will his fear lead to anger, hate and the Dark Side? It's all heading to one of the greatest confrontations of all time. Prepare for a grave disturbance in the Force!

If you've seen the film version of The Empire Strikes Back, then you've read this book, and vice versa; it's a fairly faithful adaptation. What really makes this book stand out is the remastered coloring. Marvel took the original plates for the art and had them recolored using contemporary coloring techniques, and the result is fantastic. The book just looks beautiful. If you're just a casual fan, this probably wouldn't interest you too much, but for the hardcore Star Wars fan, I think this would be a great addition to their library.
Posted by tapestry100 at 5:00 AM