Star Wars: The Weapon of a Jedi: A Luke Skywalker Adventure by Jason Fry, illustrated by Phil Noto 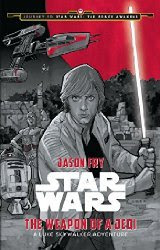 Goodreads • LibraryThing
To purchase any of the books in this post and help me buy more books, click the links above!


Luke Skywalker returns for an all-new adventure in this thrilling upper middle grade novel. Set between Star Wars: A New Hope and Star Wars: The Empire Strikes Back, the story finds Luke Skywalker, C-3PO, and R2-D2 stranded on a mysterious planet, and explores a dangerous duel between Luke and a strange new villain. Hidden in the story are also clues and hints about the upcoming film Star Wars: The Force Awakens, making this a must-read for fans old and new!

The Rebel Alliance has destroyed the Empire's dreaded Death Star, but the galaxy remains convulsed by civil war, and the Imperial starfleet is hunting the rebels throughout the galaxy.

Luke Skywalker, the pilot who destroyed the Death Star, is now hailed as a hero. But Luke seeks only to support the freedom fighters, serving the Rebellion behind the controls of his X-wing fighter.

Even as he flies alongside the pilots of Red Squadron, Luke feels stirrings in the mystical energy field known as the Force. And this farm boy turned fighter pilot begins to suspect that his destiny lies along a different path...

One of a trio of middle grade books released as part of Force Friday and the Journey to Star Wars: The Force Awakens publishing initiative (the others are Star Wars: Moving Target: A Princess Leia Adventure and Star Wars: Smuggler's Run: A Han Solo Adventure), Jason Fry's Star Wars: The Weapon of a Jedi: A Luke Skywalker Adventure tales place between the events of Episode IV: A New Hope and Episode V: The Empire Strikes Back and finds Luke Skywalker, C-3PO, and R2-D2 stranded on a planet that Luke feels the Force is trying to get him to go to, only to discover a lost Jedi temple there.

This is a short book, and it feels like it. While Smuggler's Run, at the same page count, felt like a complete story, this feels like we are only being shown the highlights of Luke's time in the Jedi temple. While it is written as if only a short time is spent in the temple, I feel like this entire time frame could have been built up a little; Luke seems to move much too quickly in his understanding of the Force in such a short amount of time. I know it's necessary for this to happen in such a short book, but perhaps this volume could have benefited from a larger page count (the Princess Leia story had a larger page count, so I don't think the authors were limited on how long the book needed to be). Either way, the story itself is still fun, and while Luke seemed a little too confident and mature for how young he should have been here, I still felt like this is the Luke that we know. C-3PO and R2-D2 are spot on with their characterizations, and the new characters introduced felt like they fit in the Star Wars universe. (I have a feeling that we'll be seeing more of villain, Sarco Plank, in Episode VII: The Force Awakens.)

The Weapon of a Jedi is marketed as a middle grade book and while it isn't a necessary read for the overall Star Wars story, it's still a fun story for any Star Wars fan, young or old. For me, it was definitely the weakest of the three middle grade books released, but it still holds up on its own.

A note on the design of the book: All three of the middle grade books are packaged similarly, each set up in three parts with a prologue and an epilogue. Before each section there is an illustration by Phil Noto that is presented in greyscale with red highlighted areas. The red is reflected throughout the chapter openers, as well as the dust jacket covers and the boards of the book. The entire thing comes together in such an impressive package. I'm hoping that if they do anymore middle grade adventures of other Star Wars characters that they keep this same packaging throughout, as it is top notch.
Posted by tapestry100 at 5:00 AM