Doctor Who: The Complete History, Vol 55 - Stories 181-184: Gridlock, Daleks In Manhattan/Evolution of the Daleks, The Lazarus Experiment, and 42 by John Ainsworth 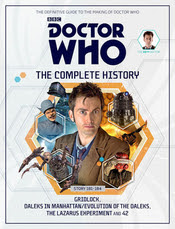 Volume 55 (1st delivered volume) of Doctor Who: The Complete History features episodes starring The Tenth Doctor: "Gridlock" - On New Earth in the far future, the Doctor and Martha discover that the population are spending their lives, trapped on a motorway; "Daleks in Manhattan/Evolution of the Daleks" - Arriving in New York during the Great Depression, the Doctor and Martha discover that the Daleks are secretly using the new Empire State Building as part of a plan to enslave humanity; "The Lazarus Experiment" - The elderly Professor Lazarus has found a way to rejuvenate himself into a younger man. But the Doctor discovers that the process is flawed, causing Lazarus to transform into a rampaging monster; "42" - The clock is ticking as the Doctor and Martha have just 42 minutes to save a stricken spaceship from plunging into a sun.

Doctor Who: The Complete History is a series of fortnightly published hardcover editions that will cover the complete history of the television series, covering everything from plot synopsis to pre-production, production, and post-production, cast and crew listings, and just about everything else that a fan of the series would want to know about the actual process of creating each of the episodes. Truly, I believe only a hardcore fan of the series will enjoy this series of books, but if you want some great, detailed information on the Doctor Who television series, this is it.
Posted by tapestry100 at 5:00 AM