Number of books acquired: not sure
Number of those books read: not sure

Number of books acquired: not sure
Number of those books read: not sure
Posted by tapestry100 at 11:00 PM No comments:

The Snare by Cavan Scott
My rating: 3 of 5 stars

Plotted: A Literary Atlas by Andrew DeGraff
My rating: 4 of 5 stars

View all my reviews
Posted by tapestry100 at 5:30 AM No comments:

A goofy yet fun little book, but let's be honest: if you follow their Instagram, you've already read this book.

Can't even really justify giving it a star rating.

I received an advanced copy of this book from the publisher for a fair and honest review.

The Escape by Cavan Scott
My rating: 3 of 5 stars

The Fireman by Joe Hill 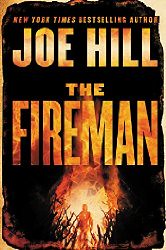 
From the award-winning, New York Times bestselling author of NOS4A2 and Heart-Shaped Box comes a chilling novel about a worldwide pandemic of spontaneous combustion that threatens to reduce civilization to ashes and a band of improbable heroes who battle to save it, led by one powerful and enigmatic man known as the Fireman.

The fireman is coming. Stay cool.

No one knows exactly when it began or where it originated. A terrifying new plague is spreading like wildfire across the country, striking cities one by one: Boston, Detroit, Seattle. The doctors call it Draco Incendia Trychophyton. To everyone else it’s Dragonscale, a highly contagious, deadly spore that marks its hosts with beautiful black and gold marks across their bodies—before causing them to burst into flames. Millions are infected; blazes erupt everywhere. There is no antidote. No one is safe.

Harper Grayson, a compassionate, dedicated nurse as pragmatic as Mary Poppins, treated hundreds of infected patients before her hospital burned to the ground. Now she’s discovered the telltale gold-flecked marks on her skin. When the outbreak first began, she and her husband, Jakob, had made a pact: they would take matters into their own hands if they became infected. To Jakob’s dismay, Harper wants to live—at least until the fetus she is carrying comes to term. At the hospital, she witnessed infected mothers give birth to healthy babies and believes hers will be fine too... if she can live long enough to deliver the child.

Convinced that his do-gooding wife has made him sick, Jakob becomes unhinged, and eventually abandons her as their placid New England community collapses in terror. The chaos gives rise to ruthless Cremation Squads—armed, self-appointed posses roaming the streets and woods to exterminate those who they believe carry the spore. But Harper isn’t as alone as she fears: a mysterious and compelling stranger she briefly met at the hospital, a man in a dirty yellow fire fighter’s jacket, carrying a hooked iron bar, straddles the abyss between insanity and death. Known as The Fireman, he strolls the ruins of New Hampshire, a madman afflicted with Dragonscale who has learned to control the fire within himself, using it as a shield to protect the hunted . . . and as a weapon to avenge the wronged.

In the desperate season to come, as the world burns out of control, Harper must learn the Fireman’s secrets before her life—and that of her unborn child—goes up in smoke.

I'm not quite sure how to review Joe Hill's The Fireman. On the one hand, I found the book compelling enough to basically read it in two sittings. On the other hand, when all was said and done, I don't actually think that it is very good, which surprised me. Being titled The Fireman, I expected more from the actual Fireman, but I'm pretty sure the book wouldn't have sold as well had it been titled The Pregnant Nurse, because that's who the book is really about.

Harper Grayson née Willowes is trying to find her way in a world that has been ravaged by a new plague called Draco Incendia Trychophyton, otherwise known as Dragonscale. When infected, the human body presents the contagion as bands of black and gold markings on the skin, and eventually the sick will spontaneously combust. Harper was a nurse at a hospital and eventually contracts the disease. At the same time, she becomes pregnant and her partner, Jakob, goes mad thinking she spread it to him as well.

After Jakob tries to kill Harper and she is rescued by the Fireman, she is brought to Camp Wyndham where a small congregation has come together and has found a way to keep from burning by entering what is called the Bright. Being a nurse, she is taken on as the ad hoc doctor for the camp.* While everything at Camp Wyndham appears perfect at first, eventually it all predictably falls apart, as secrets are kept, items and food are stolen, and a religious fervor begins to take over the group. Harper, with a small number of other infected, decides that it is time to escape Camp Wyndham, but before they can do that, things go even more wrong, and in the end, it's Harper, the Fireman, and three others who manage to escape to make their way north to Martha Quinn's island, a sanctuary for those who are infected.**

This is all a very simplistic breakdown of the story, as the book is over 700 pages, so there are many nuances in the story that I've glazed over. There should be quite a bit in this book that I should like, and I did enjoy some of it, but many sections ran on for way too long for my liking. I grew wary throughout the second act of the book while Harper is trying to deal with the religious fervor in the camp. It was all just a bit too predictable for me; I had it figured who was behind everything far before the reveal. And the Fireman's numerous flashback expositions during this section felt a little forced, and every time we came across one, I couldn't help to think, "Of course we need a flashback right now. Because, exposition."

During the third act of the book, I couldn't help but think that Hill was trying to create his own condensed version of The Road by way of his dad.*** Again, this section just drug on for way too long as they are chased by Harpers's ex, and then forced to walk for miles and miles, and I get why it did as he was creating a false sense of security, but I knew something was up by the time they got to the processing center for Martha Quinn's island. And did I mention that Harper is very pregnant through this entire ordeal?

The title character, the Fireman, takes a backseat to the action for most of the time, or is just the plot device to help Harper achieve her goals. And is also the necessary love interest. Because, it's a woman, so she needs to fall in love with someone. I felt the Fireman should have been a little more enigmatic, more a force of nature than a wise-cracking Brit.

Yet, through all that I didn't like about the book, Hill writes with an urgency that makes the book practically unputdownable, which is where I'm having a hard time not liking the book. I couldn't wait to see how everything played out, yet the entire time I was vaguely bored with the whole thing. It just seemed like Hill was using way too many too familiar tropes and in the end, the book didn't feel all that original.


* Now, I'm not a nurse and I could be very wrong about this, but it seemed that Harper's medical knowledge appeared to be a bit more involved than a nurse's would be. Please feel free to correct me if I'm wrong.

*** I'm sorry, but this time, I really felt that Hill was channeling his dad in this book. I try not to make that comparison between the two, but this book felt too much like something his dad would have written. And no, I would not compare it to The Stand.


The Fireman by Joe Hill will be published May 17, 2016, from William Morrow.


I received a free digital ARC from Edelweiss for a fair and honest review.

Dear Pope Francis: The Pope Answers Letters from Children Around the World by Pope Francis

Dear Pope Francis: The Pope Answers Letters from Children Around the World by Pope Francis
My rating: 3 of 5 stars

For those that know me, it might be a surprise to find that I read this book. However, despite my feelings on religion, I've been impressed with Pope Francis and the message that he is sending. When I heard about this book, I was intrigued to see what his responses to children's questions would be like. While his answers to the children's questions are naturally Christian-based, he also gives advice that anyone from any faith or background could use: that peace, love, and calm are important aspects to being a good person.