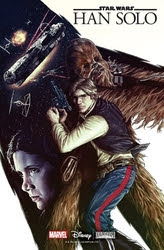 Han Solo by Marjorie M. Liu
My rating: 4 of 5 stars

I believe this volume takes place shortly after Episode IV: A New Hope.

After deciding to take a break from the Rebellion and go back to being a smuggler, Han Solo is abruptly pulled back into the Rebellion by Leia with a proposal he finds hard to turn down: a chance to race the Dragon Void run, a prestigious racing competition. Of course, Leia has ulterior motives for needing Han, but all he sees is a chance at the prestige of winning this race. The race itself made me feel a little like this was a galactic version of the Hunger Games, as the race's organizers set up specific obstacles for the racers to avoid (not that this is a race to the death, but I just got the impression of that idea). There was also a little more science fiction than I'm used to with Star Wars, with the inclusion of wormholes and other dimensions, but it worked really well here. Marjorie Liu really had a grasp of the characters and handled them quite well; I had no problem hearing Han's and Leia's voices in my head. Mark Brooks' art is fantastic here and I'm hoping that Marvel utilizes him more frequently on the Star Wars titles. Overall, this is a solid addition to the Marvel portion of the Star Wars universe.