The Princess Diarist by Carrie Fisher 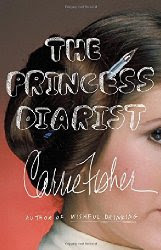 The Princess Diarist by Carrie Fisher
My rating: 5 of 5 stars

This is Carrie Fisher's memoir of her time during the filming of Star Wars Episode IV, including entries from the diaries she kept during that time that she recently discovered. I think this was the first time that Fisher really talked about her relationship with Leia, and what Leia has offered to her over the years. She also talks about her fans, and how much they mean to her and everything about the ending of the book was so much more heartbreaking given the circumstances. I was genuinely surprised by how touching her closing chapters were, in regards to her relationship with Leia and the Star Wars community as a whole.

It was a little surreal reading this so soon after both her death and her mother's, as she talks frequently about her mother in the book, as well as mentioning a couple of times, in an offhand manner, how she would like to be remembered for certain events. Perhaps it was too soon for me after her death. Not that I was ever necessarily a huge Carrie Fisher fan, but I've certainly been a Star Wars fan my whole life (I saw the original Star Wars when it was released - I was 3), so while there was never necessarily a Carrie Fisher in a my life, there has always been a Princess Leia, and it seemed to hit home a little for me. It also made me unreasonably angry that Carrie Fisher died; in a year of so many celebrity deaths, it seemed like just another death to some, but it made me angry because she overcame so much, and still had so much to do and offer to the world. So, yeah - maybe I should have put a little time in between her death and reading this book, knowing it was her last, but it seemed like the thing to do at the time. It is typically funny in that Carrie Fisher way, but equally sad given the circumstances. I fairly certain, however, that again, in that typically funny Carrie Fisher way, she would have found some way to turn her death into an appropriate epilogue to this book.