Renato Jones: The One%, Season 1 by Kaare Kyle Andrews 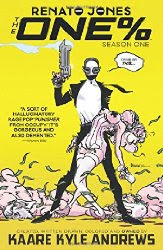 Renato Jones: The One%, Season 1 by Kaare Andrews
My rating: 4 of 5 stars

Renato Jones was born into privilege, died because of that privilege, and was reborn again through that privilege, and now he spends his time between being one of the ONES, the top 1% wealthiest people in the world, and the Freelancer, making sure that the ONES still know their place in the world. Making definite nods to Frank Miller (I'm not familiar with Andrews work, so I don't know if his artistic and writing styles are usually this influenced by Miller, but it is quite clear in this book), this first volume of Renato Jones is a hyper-stylized, hyper-violent, hyper-sensational free for all that seems eerily prescient of today's political atmosphere. The book is cleverly constructed, with fake ads throughout that mock the ridiculous over the top nature of the super rich in the book. Personally, I'm thoroughly intrigued to see where Andrews is going to take this series so will be following along for sure.