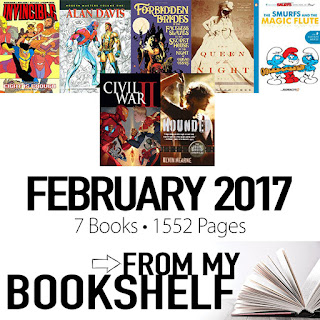 Top Book of the Month
The Queen of the Night by Alexander Chee, narrated by Lisa Flanagan

Number of books acquired: 34
Number of those books read: 7


Slow reading month. Getting ready to go into hospital for my transplant, so I'm a little distracted.

Smurfs, Vol 2: The Smurfs and the Magic Flute by Peyo

The Smurfs #2: The Smurfs and the Magic Flute by Peyo
My rating: 4 of 5 stars

The Queen of the Night by Alexander Chee 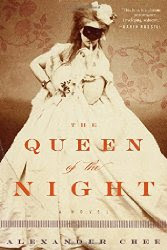 The Queen of the Night by Alexander Chee
My rating: 5 of 5 stars

I'm not really sure what to say about Alexander Chee's novel The Queen of the Night other than it is magnificent. A sprawling, epic tale that put me in mind of Arthur Golden's Memoirs of a Geisha, we follow Paris Opera sensation Lilliet Berne as she recounts her life from her humble beginnings as an orphaned American child, who tried to make her way to Europe to the only family she new of after the death of her family and ended up being swept up by one circumstance after another into the spectacle that was the Second French Empire. We follow her life from her time with a traveling circus, to becoming a prostitute in one of Paris' more prestigious whorehouses, to her time as a dresser for Empress Eugénie de Montijo at the Tuileries, until she finally makes her debut at the French Opera. Through this tale, she is trying to discover who might know of her secrets, as each time she took on a new role, she also cast off her old life and name and reinvented herself at each turn, trying to finally free herself from her own past and come into the life that she wants for herself.

Chee seems to have thoroughly researched his setting for Lillet's journey, and his writing is strong and precise. Lilliet's life is quite an adventure, but it never seems to be dull, and I never felt like I was wishing that her tale would hurry along. I listened to the audio version, and Lisa Flanagan's narration is spot on; she truly became the voice of Lilliet for me. The only thing that I added to my own listening of the book that I think could possibly benefit other readers is that I listened to selections of the operas and other musical pieces that are mentioned in the book, to add that next level of enjoyment to the story.

Chee is an extraordinary storyteller and I'll definitely be reading more by him in the future.

Forbidden Brides of the Faceless Slaves in the Secret House of the Night of Dread Desire by Neil Gaiman, adapted by Shane Oakley 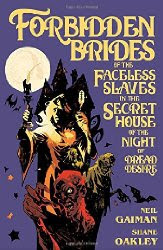 Forbidden Brides of the Faceless Slaves in the Secret House of the Night of Dread Desire by Neil Gaiman
My rating: 2 of 5 stars

Basically one long run on joke about all the tropes found in every Gothic tale ever told, this is the weakest of Dark Horse's Gaiman adaptations. I haven't read the original story this was adapted from, so I'm not sure if this is worse/better or if it's Gaiman's story or Oakley's adaptation, but I quickly found myself skimming thru just to get to the end, and when you're reading something only 48 pages long and you start skimming when you're only half way thru... 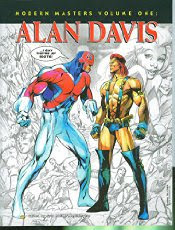 A nice volume about comic book artist Alan Davis, who has been a favorite of mine since I first encountered his art in Uncanny X-Men back in the late 80s. Including an interview with Davis, the book is also filled with sketches, finished art, previously unseen art, a look at the artists that have influenced Davis over the years, as well as interviews with some of Davis' contemporaries. If you're a fan of the history of comic books and want a firsthand look into the life and influences of Alan Davis, this is the perfect book for you. 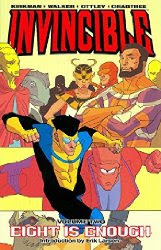 Invincible, Vol. 2: Eight Is Enough by Robert Kirkman
My rating: 4 of 5 stars

This story continues to impress me; with some great humor, well paced action, and some genuine mystery added in for good measure, this volume is definitely all about later plots. While the first volume, Family Matters, set up the core characters for Invincible, this volume is clearly set up as starting points for future story lines, so while it doesn't actually seem like much happens here, it just makes me want to continue reading so I can see how all these plot threads play out. Cory Walker's art and Bill Crabtree's colors are top notch again; I really like the minimal line art and coloring. The inclusion of different artists working on the introduction of additional characters to the book was a nice touch too, helping each character stand out a little while having the briefest of introductions. On to the third volume!