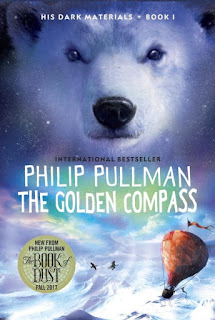 Schuler Books • Amazon
To purchase any of the books in this post and help me buy more, click the links above!


Lyra Belacqua is content to run wild among the scholars of Jordan College, with her daemon familiar always by her side. But the arrival of her fearsome uncle, Lord Asriel, draws her to the heart of a terrible struggle—a struggle born of Gobblers and stolen children, witch clans and armored bears. And as she hurtles toward danger in the cold far North, Lyra never suspects the shocking truth: she alone is destined to win, or to lose, this more-than-mortal battle.

Philip Pullman's award-winning The Golden Compass is a masterwork of storytelling and suspense, critically acclaimed and hailed as a modern fantasy classic.

This Yearling paperback edition includes 15 pages of bonus material: some found letters of Lord Asriel, his scientific notes and other archival documents. This edition also features artwork by Philip Pullman at the opening of each chapter.

"A shattering tale that begins with a promise and delivers an entire universe." --Kirkus Reviews, Starred

"The Golden Compass is one of the best fantasy / adventure stories that I have read. This is a book no one should miss." --Terry Brooks (Goodreads)

Philip Pullman's The Golden Compass will forever be one of my favorite books. I remember reading it when it was first published in 1995 and thinking then I had never read anything like it before, and each subsequent reading (along with the other books in the His Dark Materials series, The Subtle Knife and The Amber Spyglass) still brings that feeling of wonder. The ideas and themes that Pullman introduces in these books challenged me as a reader then, and still do over 20 years later.

Lyra's story of friendship and loyalty found in the most unlikely places, and opposing and challenging those whose beliefs may be strong but not necessarily in the right, resonated strongly with me right out of high school, and I still think that these are important themes for any young reader to experience, especially told through Lyra's eyes. Her strength of character and resolve in what she believes right creates a fantastic role model for anyone, but especially those, I think, who are trying to find their way in the world and are looking to literature to help them. Of course, Pullman disguises much of this in a fast-paced adventure story filled with political intrigue and suspense around every corner, so it will keep readers both young and old eager to find out what happens next. Not every book deserves the title "unputdownable", but I think this was one of my first experiences with a book that earned that description for me. An alternate universe, witches, daemons, polar bears who talk, and more make this book one of the more unique books you'll read, and Philip Pullman's writing is beautiful and poignant.

Now, I have exciting news for those of us who have read Lyra's story and have longed to be back in her world: Philip Pullman has recently announced that he is working on a new companion trilogy, with the first volume The Book of Dust coming out this fall! Here is more information from the official press release:

Two decades after The Golden Compass (1996)—the first book of Pullman’s world-famous His Dark Materials trilogy, which has sold more than 17.5 million copies in over 40 languages—THE BOOK OF DUST (#BookofDust) will return to the parallel world that has enthralled readers young and old. The plot will remain under wraps until publication in October, but it can be revealed that the book is set ten years before The Golden Compass and centers on the much-beloved Lyra Belacqua. Alethiometers, daemons, and the Magisterium return to play their part, and Pullman also introduces a host of new characters.

Pullman says: “I know from their letters and tweets that my readers have been waiting patiently (mostly) for THE BOOK OF DUST for a long time. It gives me great pleasure and some excitement at last to satisfy their curiosity (and mine) about this book. So, is it a prequel? Is it a sequel? It’s neither. In fact, THE BOOK OF DUST is… an ‘equel’. It doesn’t stand before or after His Dark Materials, but beside it. It’s a different story, but there are settings that readers of His Dark Materials will recognize, and characters they’ve met before. Also, of course, there are some characters who are new to us, including an ordinary boy (a boy we have seen in an earlier part of Lyra’s story, if we were paying attention) who, with Lyra, is caught up in a terrifying adventure that takes him into a new world.”

Personally, I can't wait for this new volume to be released! To be able to revisit Jordan and its inhabitants again is something I've been wanting for many years now. In the meantime, I'll be re-reading the rest of the His Dark Materials books in preparation.


Thanks for stopping by today, and as always, happy reading!


I received a finished print copy of this book from the publisher for a fair and honest review.


If you are interest in the other books in the His Dark Materials series, or the companion volumes that have already been released, you can check those out here: