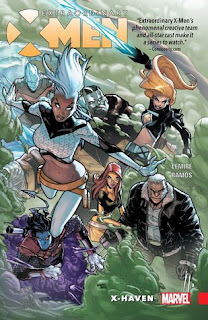 
The fate of mutantkind is decided here! Staring down the threat of extinction once more, veteran X-Man Storm pulls together the team she'll need to ensure her race's survival. Together, these EXTRAORDINARY X-MEN will struggle with the familiar burden of being hated and feared, while facing threats the likes of which they've never seen. Here's hoping they survive the experience!

I won't lie, I miss the X-Men of my younger years (late 80s/early 90s). I've been trying to reconcile their fall from popularity and the direction their stories have been taking in light of the Marvel Cinematic Universe (don't get me started on the X-Men movie franchise **shudders**), but I've been sticking with it. This book, my first post-Secret Wars X-Men experience, has left me torn: even tho every aspect of this book has already been done before (mutants being hated for being different; mutants needing to go into hiding; mutants being on the edge of extinction for about the third time in a decade now; Sinister conducting his weird experiments and playing around with famous mutant's DNA), it did leave me wondering what was going to happen next, so that's at least somewhat good storytelling, right? Right?! Sigh.

There are things I don't understand in this post-Terrigen bomb/Secret Wars world: what exactly is the difference between being an Inhuman or mutant and why is one seen as seemly being acceptable by the populace at large? Other than needing to push the Inhuman as the new version of being a mutant in the MCU, I see no distinction. What does it matter if the Terrigen mists are making mutants sterile? Don't normal humans give birth to mutants, as well? Maybe it's changing the structure of the entire world's DNA? What if a human with dormant Inhuman genes gives birth to a mutant? What would the Terrigen mists do to the mutant? How long does the Terrigen mist linger in the atmosphere? I'm hoping some of this is addressed at some point.
Posted by tapestry100 at 5:00 AM