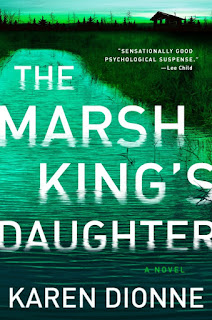 
Praised by Lee Child and Karin Slaughter, and sure to thrill fans of The Girl on the Train and The Widow, The Marsh King’s Daughter is mesmerizing psychological suspense, the story of a woman who must risk everything to hunt down the dangerous man who shaped her past and threatens to steal her future: her father.

At last, Helena Pelletier has the life she deserves. A loving husband, two beautiful daughters, a business that fills her days. Then she catches an emergency news announcement and realizes she was a fool to think she could ever leave her worst days behind her.

Helena has a secret: she is the product of an abduction. Her mother was kidnapped as a teenager by her father and kept in a remote cabin in the marshlands of Michigan’s Upper Peninsula. No electricity, no heat, no running water, not a single human beyond the three of them. Helena, born two years after the abduction, loved her home in nature—fishing, tracking, hunting. And despite her father’s odd temperament and sometimes brutal behavior, she loved him, too… until she learned precisely how savage a person he could be.

More than twenty years later, she has buried her past so soundly that even her husband doesn’t know the truth. But now her father has killed two guards, escaped from prison, and disappeared into the marshland he knows better than anyone else in the world. The police commence a manhunt, but Helena knows they don’t stand a chance. Knows that only one person has the skills to find the survivalist the world calls the Marsh King—because only one person was ever trained by him: his daughter.

Helena Pelletier's life is more or less exactly what she wants: a husband and two daughters she loves deeply, a home business that keeps her busy during the days, her past a secret that she keeps hidden from everyone. Helena has worked hard for these things and she prides herself in her accomplishments, until the day her father escapes from prison and she immediately understands that her past is going to catch up to her, whether she wants it to or not. She also knows that the only way to keep her family safe and put her father back in prison is to find and deal with her father herself, since he was the one who trained her to live in the marshes of Michigan's Upper Peninsula, where he was keeping her mother captive after he had kidnapped her as a young girl.

With the main part of the story taking place over 24 hours "real time" with Helena tracking her father, the actual meat of the story all takes place in flashbacks as Helena thinks back on her childhood in the marshes of the UP and how her father treated her and her mother, who her father kidnapped as a young girl and made his wife. As she closes in on her father, she goes over various aspects of the only life she knew as a child, until her mother's past starts to catch up to her and Helena realizes that much of her life has been a lie perpetrated by both her father and mother and isn't exactly what they told her it was. As she grows older and finally starts to understand that even though this is the only life she's ever known, it may not be the life that either she or her mother deserves, and when she finally escapes her father's control she discovers that there is in fact an entire world she never knew about outside the marsh.

To be honest, the story of Helena's childhood is what really makes this book. Personally, I felt the entire portion of the book that is taking place in "real time" where Helena knows that she's the only one who can find her father, regardless of the large police force searching for him, and that she knows exactly where to look for him in the entire area surrounding her home and the prison he escaped from all seemed far to convenient, and only plausible in order to make this portion of the story move forward. Helena's memories of her childhood and the psychological aspects of being a child who has been raised in an extreme situation, but one that seems normal to her only because it's all that she knows, was fascinating. Her recollections of her father teaching her how to hunt and live in the wilderness, and her childhood idolization of him in this respect juxtaposed against her later feeling towards him as she starts to mature and gain some sense of adolescent independence, and her eventual discovery that her whole life has been based on lies and the kidnapping of her mother, was remarkable storytelling, and Karen Dionne delivers this entire sequence of events deftly and with sharp storytelling. While the "real time" story requires quite a hefty amount of suspension of disbelief, the background story well makes up for this and creates a truly mesmerizing and atmospheric story that will keep you up late into the night, turning the page for more.


I received a print ARC of this book from the publisher for a fair and honest review.
Posted by tapestry100 at 5:00 AM