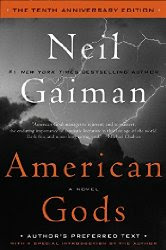 Schuler Books • Amazon • Audible
To purchase any of the books in this post and help me buy more books, click the links above!


First published in 2001, American Gods became an instant classic—an intellectual and artistic benchmark from the multiple-award-winning master of innovative fiction, Neil Gaiman. Now discover the mystery and magic of American Gods in this tenth anniversary edition. Newly updated and expanded with the author’s preferred text, this commemorative volume is a true celebration of a modern masterpiece by the one, the only, Neil Gaiman.

Locked behind bars for three years, Shadow did his time, quietly waiting for the magic day when he could return to Eagle Point, Indiana. A man no longer scared of what tomorrow might bring, all he wanted was to be with Laura, the wife he deeply loved, and start a new life.

But just days before his release, Laura and Shadow’s best friend are killed in an accident. With his life in pieces and nothing to keep him tethered, Shadow accepts a job from a beguiling stranger he meets on the way home, an enigmatic man who calls himself Mr. Wednesday. A trickster and rogue, Wednesday seems to know more about Shadow than Shadow does himself.

Life as Wednesday’s bodyguard, driver, and errand boy is far more interesting and dangerous than Shadow ever imagined—it is a job that takes him on a dark and strange road trip and introduces him to a host of eccentric characters whose fates are mysteriously intertwined with his own. Along the way Shadow will learn that the past never dies; that everyone, including his beloved Laura, harbors secrets; and that dreams, totems, legends, and myths are more real than we know. Ultimately, he will discover that beneath the placid surface of everyday life a storm is brewing—an epic war for the very soul of America—and that he is standing squarely in its path.

Relevant and prescient, American Gods has been lauded for its brilliant synthesis of “mystery, satire, sex, horror, and poetic prose” (Michael Dirda, Washington Post Book World) and as a modern phantasmagoria that “distills the essence of America” (Seattle Post-Intelligencer). It is, quite simply, an outstanding work of literary imagination that will endure for generations.

There's not much I could probably add to the discussion about American Gods that hasn't already been said, but I can say that I loved this story. I had been meaning to get around to reading this, and when the show finally starting running on Starz, I thought now is as good a time as any. I'm surprised by how different the show is from the book; I can understand the updates to technology in the show as the book is over 15 years old and tech has evolved in that time, but in addition to that, there are some significant changes to how the show is being altered, and to be honest, there's a part of me that likes the show better than the book, but Gaiman's story is still marvelous. I'm very interested to see how the show will play out, especially given the story arc and character changes.

I'm wildly interested in reading Anansi Boys, but I'll be taking a short break in between the two books. I don't want to get overloaded on gods!

A note on the full cast reading of the 10th Anniversary Edition
I decided to listen to the book on my work commute, and I'm not going to lie, I loved the cast reading. They various narrators handled each of their characters perfectly and were totally believable. I'm really hoping that the audio of Anansi Boys is handled just as well.


Here's the trailer for the show: