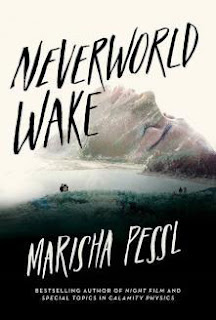 
Enter a realm where fears are physical and memories come alive in this absorbing psychological suspense thriller with a twist, from acclaimed New York Times bestselling author of Special Topics in Calamity Physics and Night Film.

Once upon a time, back at Darrow-Harker School, Beatrice Hartley and her five best friends were the cool kids, the beautiful ones. Then the shocking death of Jim--their creative genius and Beatrice's boyfriend--changed everything.

One year after graduation, Beatrice is returning to Wincroft--the seaside estate where they spent so many nights sharing secrets, crushes, plans to change the world--hoping she'll get to the bottom of the dark questions gnawing at her about Jim's death.

But as the night plays out in a haze of stilted jokes and unfathomable silence, Beatrice senses she's never going to know what really happened.

Then a mysterious man knocks on the door. Blithely, he announces the impossible: time for them has become stuck, snagged on a splinter that can only be removed if the former friends make the harshest of decisions.

Now Beatrice has one last shot at answers… and at life.

And so begins the Neverworld Wake.

OK, so I've now been trying to write a review that doesn't give anything away about this book, and I can't. So I'll just give you my general impressions about aspects of the book. I've been sitting on my review of Marisha Pessl's Neverworld Wake for a couple of days now, wondering how I wanted to write this. On the one hand, this is typical Pessl, with a twisting, unpredictable story that doesn't necessarily end up where you think it will. On the other, this is Pessl's first foray into YA, and I think it suffered a little from that. Almost all of her characters come from some life of ridiculous privilege and by halfway thru the book, I had grown very tired of hearing about it, because inevitably it felt like she needed to remind us of their privilege and untouchability. Maybe it was just me, but it felt a little heavy handed on Pessl's part. Add to that, unless I missed it, is there is no real explanation for what is happening to the characters. There's some half-cocked reasoning behind it all, but there is no solid answer to the question, "Why? Why does this happen? Why do these characters need to make this decision?" Maybe it was the fact that this book was far too easy to put down and that it took me almost all month to read it because it wasn't holding my attention all that well and by the end of the month and finishing the book, I wasn't entirely sure I remembered what happened at the beginning, and didn't care enough to go back to reread portions to get caught back up.

I don't know, maybe others will find this enthralling, but for me, I just ended up having more questions than answers by the end. I feel like this should honestly be a 2 star book, but at the end of the day, I kept thinking about it more and more, so I guess that garnered it an extra star? Maybe? edit: Just kidding. Back to a 2 star it goes.

And to be honest, I really wish I'd been reading the book being referenced to in Neverworld Wake far more than NW. Maybe someday, we'll get that book, because that one sounded intriguing as hell.


I received an advanced print copy of this book from the publisher for a fair and honest review.
Posted by tapestry100 at 5:00 AM