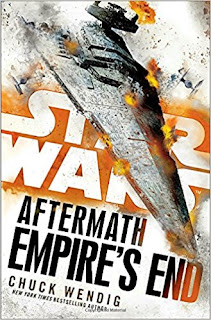 EVERY END IS A NEW BEGINNING.

As the final showdown between the New Republic and the Empire draws near, all eyes turn to a once-isolated planet: Jakku.

The Battle of Endor shattered the Empire, scattering its remaining forces across the galaxy. But the months following the Rebellion’s victory have not been easy. The fledgling New Republic has suffered a devastating attack from the Imperial remnant, forcing the new democracy to escalate its hunt for the hidden enemy.

For her role in the deadly ambush, Grand Admiral Rae Sloane is the most wanted Imperial war criminal—and one-time rebel pilot Norra Wexley, back in service at Leia’s urgent request, is leading the hunt. But more than just loyalty to the New Republic drives Norra forward: Her husband was turned into a murderous pawn in Sloane’s assassination plot, and now she wants vengeance as much as justice.

Sloane, too, is on a furious quest: pursuing the treacherous Gallius Rax to the barren planet Jakku. As the true mastermind behind the Empire’s devastating attack, Rax has led the Empire to its defining moment. The cunning strategist has gathered the powerful remnants of the Empire’s war machine, preparing to execute the late Emperor Palpatine’s final plan. As the Imperial fleet orbits Jakku, an armada of Republic fighters closes in to finish what began at Endor. Norra and her crew soar into the heart of an apocalyptic clash that will leave land and sky alike scorched. And the future of the galaxy will finally be decided.

For as little as I liked the first book in the trilogy, Wendig's Aftermath story really grew on me, and there are some very tantalizing bits that I'm hoping will be expanded on in the future: Mentions of past events in the Star Wars universe that we haven't heard of before? What exactly was Palpatine looking for out in the area beyond the known galaxy? What did Brendol Hux and the other passengers of the Imperialis discover on their voyage, and how did that lead to the creation of the First Order? I know a lot of people were disappointed in the writing off of the Expanded Universe novels in favor of these in-canon novels, but I'm glad it happened. These novels have expanded on the movies and really add to the tapestry of the overall Star Wars universe in ways that the movies probably wouldn't be able to do, and the fact that they are all aware of each other and stick to the same storylines just adds volumes to the SW experience.

While I still wish that this entire trilogy had been released prior to the release of The Force Awakens as it really fills in some of the gaps leading up to that movie, the finished product stands strong on its own. And as much as reading Chuck Wendig's writing still bugs me (there's something about how he structures his sentences that drives me nuts when reading it, but listening to the audio works just fine for me - weird, I know) I hope that he is given an opportunity to flesh out some of the other plot lines that were left open or maybe give us some of the backstory to the events mentioned throughout the series from SW history.

For fans of SW and especially the new trilogy of films, I think that this would be a necessary reading experience, and something that would still hold up well for the casual SW reader.
Posted by tapestry100 at 5:00 AM