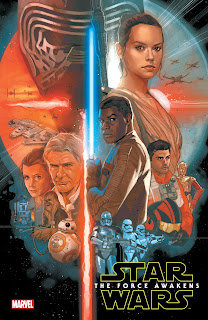 
It's been three decades since the Rebel Alliance destroyed the Death Star and toppled the Galactic Empire...but now, on the remote planet of Jakku...there is a stirring in the Force. A young scavenger named Rey...a deserting storm trooper named Finn...an ace pilot name Poe...and a dark apprentice named Kylo Ren... Their lives are about to collide as the awakening begins. Writer Chuck Wendig (Star Wars: Aftermath) and artist Luke Ross (Hercules) take us back into the saga of a lifetime!

I know this is an adaptation of the film, but when it is a word for word, scene for scene rehash with absolutely nothing new added, the redundancy of the project becomes wildly apparent. I guess I just expect to have something new added in to make it worth my time and money. I probably won't be picking up any future adaptations if they are this one dimensional.
Posted by tapestry100 at 5:00 AM