Gotham by Gaslight: A Tale of the Batman by Brian Augustyn, illustrated by Mike Mignola & P. Craig Russell 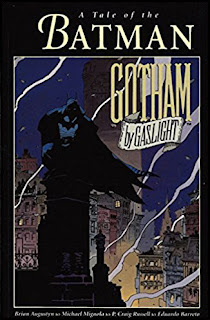 
Presenting a new edition of the title collecting the adventures of the Victorian era Batman. This volume includes the breakthrough Elseworlds epics GOTHAM BY GASLIGHT and MASTER OF THE FUTURE, which pit the Dark Knight against Jack the Ripper and a death-dealer from the skies over Gotham. This title features artwork by Mike Mignola (HELLBOY) and P. Craig Russell (THE SANDMAN).

Gotham by Gaslight is a unique retelling of the Batman origin. This book was actually the starting point for DC's later Elseworlds series due to its popularity. The Elseworlds series took their characters and reset them in time periods or circumstances different from their established histories and told one shot stories around these new ideas. The other interesting bit about this new (old) Batman story is that it can be considered a Steampunk Batman tale, before Steampunk was as popular as it is today.

Gotham by Gaslight follows the basic idea of Bruce Wayne/Batman's origin, with Bruce Wayne's family being murdered in front of him as a young boy and him later in life going out into the world to recreate himself into a force of good against evil as Batman. The difference here, however, is that this all takes place in the 1890s and his first adversary is Jack the Ripper. (This isn't spoiling anything. You learn that Jack the Ripper is in this book on the very first page.)

The real star of this book is the art by Mike Mignola. Fans of his Hellboy series will appreciate his dark and shadowy graphic sense, which ultimately lends itself perfectly to this tale. I think anybody who is a fan of Batman, or of Steampunk and is at least familiar with the Batman mythos, will find this quick read enjoyable.

This newer edition of the graphic novel also includes the lesser impressive sequel, Mast of the Future, which finds Batman up against a more generic villain and while the story is good, neither the art nor the writing is quite up the to the first volume's originality.
Posted by tapestry100 at 5:00 AM