Jim Henson's The Power of the Dark Crystal, Vol 1 by Simon Spurrier, illustrated by Kelly and Nichole Matthews 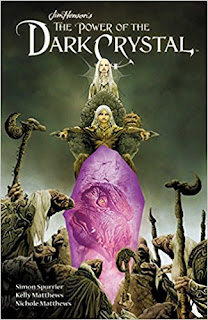 Years have passed since the Dark Crystal was healed and peace was restored on Thra. Though Jen and Kira have ruled as King and Queen, they have become distracted by power. The planet is sick and those on the surface of Thra are not the only ones effected. A mysterious race of creatures called Firelings live in a realm near the planet’s core, hidden from the Gelfling and their kingdom. A young Fireling named Thurma is tasked with stealing a shard of the Crystal to restore power to her world. Along the way she’ll befriend the young Gelfling Kensho, conjure the Skeksis and Mystics, and embark on one incredible adventure.

Written by Simon Spurrier (The Spire, X-Men Legacy) and lushly illustrated by Kelly and Nichole Matthews (Toil & Trouble), The Power of the Dark Crystal includes behind-the-scenes materials on the making of this sure to be classic tale of wonder.

When Thurma, a young Fireling (beings who live in the flames of the core of Thra), is sent to beseech help from the Gelflings who rule Thra, she sets in motion events that she does not truly understand, because she is sent to request a shard of Crystal, which her elders say will rekindle the dying flames of their world. When she is turned away, Thurma takes matter into her own hands and cracks the Crystal again, freeing once again both the Mystics and Skeksis. As she flees the Castle of the Crystle, Thurma is entirely unaware of the evil that she has let lose into the world again.

I loved this story. Based on a script that was written as the sequel to the film, this reads just like the original movie feels. All of the characters from the film make an appearance, including Aughra and Fizzgig, and everyone feels like themselves. Simon Spurrier has expertly captured the characters voices and personalities. Kelly and Nichole Matthews' art is spot on perfect for this project, with a lovely natural flow to the art that breathes life into the land people of Thra.

I wish this had been made into a film; I'm wildly curious as to how they would have created Thurma in puppet form. However, being given the opportunity to read what could have been in film is still just as thrilling. If you're a fan of The Dark Crystal, this is essential reading.
Posted by tapestry100 at 5:00 AM