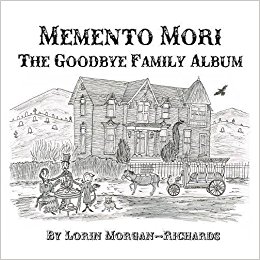 
Comic miners recently uncovered an album buried over 100 years ago after draining an outhouse in an old ghost town. While treasures are sometimes found, this one just so happened to be loaded with the 1st year of the Goodbye Family and the Noodle Rut by cartoonist Lorin Morgan-Richards.

"The Victorian era hasn't been this much fun since licking arsenic in the wallpaper." - Slug Daily News

"This album is a real danger to society." - Baron Von Nickle

Each of the single panel cartoons collected in Memento Mori: The Goodbye Family Album, reminiscent of Charles Addams' cartoons, tells a story unto themselves. Inhabited by the Goodbye Family, a close knit clan who's macabre adventures underlie their loving of one another. At first glance, the cartoons are in and of themselves fun reads, but pay attention to the details; this is where Lorin Morgan-Richards will hide little Easter Eggs, making the cartoons that much more clever. In addition to to being just plain fun, some of these cartoons tackle modern day problems in a rather macabre way sometimes, but they still strike at the problem and show just how ridiculous it can be.