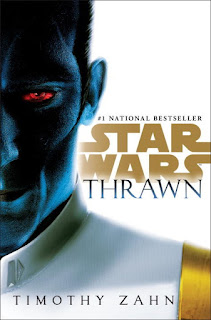 
NEW YORK TIMES BESTSELLER • In this definitive novel, readers will follow Thrawn’s rise to power—uncovering the events that created one of the most iconic villains in Star Wars history.

One of the most cunning and ruthless warriors in the history of the Galactic Empire, Grand Admiral Thrawn is also one of the most captivating characters in the Star Wars universe, from his introduction in bestselling author Timothy Zahn’s classic Heir to the Empire through his continuing adventures in Dark Force Rising, The Last Command, and beyond. But Thrawn’s origins and the story of his rise in the Imperial ranks have remained mysterious. Now, in Star Wars: Thrawn, Timothy Zahn chronicles the fateful events that launched the blue-skinned, red-eyed master of military strategy and lethal warfare into the highest realms of power—and infamy.

A great re-introduction of Zahn's creation Thrawn in the current canonical Star Wars universe, who had been part of the old Expanded Universe Star Wars books before Disney did away with those. The definitive origin of this mysterious character, I also think fans of the Star Wars: Rebels television series will find this particularly enjoyable as it fleshes out numerous characters that have appeared in that series. And again, as with other books in the new canonical SW literary universe, there are several hints at events past, present, and future that have not been touched on yet. My hope is that eventually these events will be revisited in either the movies, books, or comics; this is one of the reasons that I'm enjoying the expanded, connected storytelling going on with the new streamlined timeline, that there is so much potential in these stories, and that they have actual impact on other stories being told.

I'm definitely looking forward to the followup, Star Wars: Thrawn: Alliances (Thrawn and Darth Vader!), and I'm thinking about picking up the original Thrawn Trilogy from the Legends imprint (the old Expanded Universe books).
Posted by tapestry100 at 5:00 AM