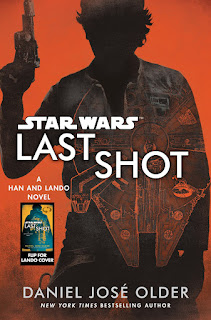 
NEW YORK TIMES BESTSELLER • Han Solo and Lando Calrissian are reunited on the Millennium Falcon in a galaxy-spanning novel inspired by Solo: A Star Wars Story. But even the fastest ship in the universe can’t outrun the past...

The hardcover edition includes a reversible jacket, with one side featuring Han and the other featuring Lando!

It’s one of the galaxy’s most dangerous secrets: a mysterious transmitter with unknown power and a reward for its discovery that most could only dream of claiming. But those who fly the Millennium Falcon throughout its infamous history aren’t your average scoundrels. Not once, but twice, the crew of the Falcon tries to claim the elusive prize—first, Lando Calrissian and the droid L3-37 at the dawn of an ambitious career, and later, a young and hungry Han Solo with the help of his copilot, Chewbacca. But the device’s creator, the volatile criminal Fyzen Gor, isn’t interested in sharing. And Gor knows how to hold a grudge...

It’s been ten years since the rebel hero Han Solo last encountered Fyzen Gor. After mounting a successful rebellion against the Empire and starting a family with an Alderaanian princess, Han hasn’t given much thought to the mad inventor. But when Lando turns up at Han’s doorstep in the middle of the night, it’s Fyzen’s assassins that he’s running from. And without Han’s help, Lando—and all life on Cloud City—will be annihilated.

With the assistance of a young hotshot pilot, an Ewok slicer prodigy, the woman who might be the love of Lando’s life, and Han’s best and furriest friend, the two most notorious scoundrels in the New Republic are working together once more. They’ll have to journey across the stars—and into the past—before Gor uses the device’s power to reshape the galaxy.

And I'm not one of the SW haters, either. Even the stuff I generally don't like, I can still find something to relate to in the story. Last Jedi? Loved it. Solo? Went into it expecting to not like it, was pleasantly surprised by how much I did end up enjoying it. I can accept new ideas in the SW universe, and I can be persuaded to change my mind about something I'm sure I'm not going to like.

I'm so disappointed in this book. I've been immensely enjoying how the books that have been released in the new Disney streamlined storytelling have tied into some aspect of the SW universe, how you can connect the dots from other books or movies. Last Shot had no feeling of continuity to it with the larger story. In fact, it doesn't really feel like a SW story at all; it feels like a story that Older had already written and then reworked into a SW novel. There's just too much working against this story for me to have really gotten into it (possible spoiler territory).

First off, it falls back on a too-often used scifi trope: That droids are going to rise up and attack the organics, but this time adding in a Frankenstein/zombie aspect that just seemed more awkward than original. That definitely didn't feel like SW. Older's writing style is clearly not for me, as there are far too many awkward chapter breaks (Why break what is essentially one chapter into 2 or 3 separate mini-chapters?), too many repetitive elements (When you make a point of having multiple characters yelling the same thing over each other so many times that the reader begins to notice this is happening, that's too much), and way too many time frames. The whole space jet suit thing? Again, doesn't feel like SW. Computer genius Ewoks? Nope, given that just 2 years prior to this story they still thought droids were gods. Gungans who speak in normal basic? Nope, since this would appear to be the only Gungan who can, and actually felt like it was written this way as an intentional excuse to show, thru Han, that RACISM IS BAD! The inclusion of a gender non-binary character is nice, but after all the other things that seemed wrong in this book, that little aspect got lost.

The multiple time frames is very problematic for me. There is Fyzen Gor, the main antagonist's, back story; Lando's back story how he and L3 encountered Gor; Han's back story on how he & Chewie also encountered Gor in the past; and then the story occurring in the now, where all three of these back stories are supposed to come together. Each of these time frames are broken up throughout the book, so there is a lot of bouncing around. I think if maybe one time frame was told and that led into the next, with the book culminating in the final story arc, this would have flowed much better, maybe. Adding to this problem for me is that I listened to this on Audible, and there are three narrators for four time frames: one for Han's story (January LaVoy), one for Lando's story (Daniel José Older), and one for Gor's story and the current story (Marc Thompson). There were numerous times that I got confused about which time frame was being handled when the story jumped between the now and Gor's story, since it was the same narrator. There really should have been four narrators total for this book. And speaking of narrators, Marc Thompson and January LaVoy did their usual spot on narrations, but I think Older needs some practice still before he narrates his own work. He narrates too quickly, and doesn't handle each of the characters as separate characters. Everything he reads sounds exactly the same, as if he's just speeding thru a reading of the book, instead of a performance of the book.

Given the amount of build up to the conclusion of the story, and given how much is at stake in the galaxy, the resolution seems far too quick, and too easy. L3's participation in the conclusion seemed too contrived (and honestly, I would have much rather seem more of her in this story) and of course, everything is resolved in just the nick of time so that there was never really any threat at all in the end. About the only thing that this book resolves is a possible explanation as to where Lando is in the current trilogy movies. And if that is all this book was supposed to do, I don't think that's really a question that was all that important in answering.

I really do hate writing reviews like this, but every book can't be a winner. I will be hard pressed to read anything by Older again; Last Shot is simply not a satisfying book.
Posted by tapestry100 at 5:00 AM