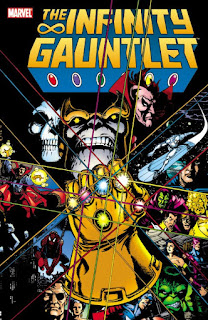 
For the dark Titan, Thanos, the Infinity Gauntlet was the Holy Grail, the ultimate prize to be coveted above all else. Now, on the edge of Armageddon and led by the mysterious Adam Warlock, Earth's super heroes join in a desperate attempt to thwart this nihilistic god's insane plunge into galactic self-destruction.

A re-read for me, but it has been a while and I wanted to see how the original Infinity Gauntlet story stands up against the MCU version. While there are obvious differences, I think both The Infinity Gauntlet and Avengers: Infinity War both stand up very well for their respective mediums. Also, given that The Infinity Gauntlet was published almost 30 years ago (how did that happen?!), I was pleasantly surprised that it still held up as well. It's also fun now to try to anticipate what is going to happen in the next movie based on the events that have been occurring in the MCU films. It's also interesting to see how the groundwork was laid for future events in the Marvel Comic Universe, even if they didn't know at the time that this story was going to have such long lasting affects.
Posted by tapestry100 at 5:00 AM