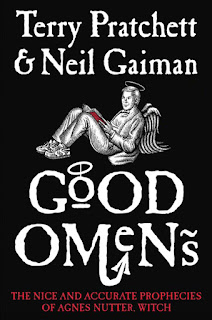 
The world will end on Saturday. Next Saturday. Just before dinner, according to The Nice and Accurate Prophecies of Agnes Nutter, Witch, the world's only completely accurate book of prophecies written in 1655. The armies of Good and Evil are amassing and everything appears to be going according to Divine Plan. Except that a somewhat fussy angel and a fast-living demon are not actually looking forward to the coming Rapture. And someone seems to have misplaced the Antichrist.

I love this book. I really, really do. It's one that I'll pull off the shelf every couple of years to read and giggle all the way through each and every time, it's just that funny. Realistically, you'd think a story about the Apocalypse really wouldn't be that funny, but in such capable hands as those of Neil Gaiman and Terry Pratchett, it's laugh out loud hysterical.

Aziraphale (the angel protecting the Garden of Eden) and Crowley (once known as Crawley, the infamous snake of Eden) have been living comfortably in modern times, having become fast friends after the whole Adam and Eve thing. When it comes time for the Apocalypse to take place, they decide to maybe try to put it off a couple more years, since they rather like living in the human world. Unfortunately, there was a mix up with the Antichrist when he was born (Warlock, who is thought to be the Antichrist, is a wildly normal young boy, while the real Antichrist, Adam Young, is living in the English countryside with his wildly normal family, not having any idea as to his true nature), and now there is a race to find the real Antichrist before everything basically goes to hell. The Four Horsemen are trying to find the Antichrist (Pollution has replaced Pestilence since penicillin was discovered), Aziraphale and Crowley are looking for him, and meanwhile all the incredibly accurate prophecies of Agnes Nutter are coming true. And what do the Tibetans and aliens have to do with anything?

I think part of what makes the story so funny is that it doesn't try to take itself seriously at all. Gaiman and Pratchett never try to take the story farther that what it is, a comedy, and don't try to make anything really philosophical about it, so regardless of your actual beliefs or feelings about the Apocalypse, this story is still accessible and still funny. It is full of Gaiman and Pratchett's trademark wit and cleverness, even though it was written respectively early on in their careers, so it's not always a polished as it could be, which is also part of its charm.

**a note on my most recent encounter with Good Omens**
Recently needing something a little lighthearted and on the recommendation from a friend, I gave the audio edition of Good Omens a go, and was not disappointed. Martin Jarvis' narration was spot on for every character, and he gave the story an entirely fresh feel. I'm sure it wasn't done intentionally, but his Crowley sounded just like David Tennant and Aziraphale sounded just like Michael Sheen, and that made me all the more excited for the upcoming BBC production. I don't know if it was just that I hadn't read it in a while or it was because I was listening to it as an audio, but I found myself laughing out loud at so many bits... it was just what I needed to put me in a better mood when I was listening to it.
Posted by tapestry100 at 5:00 AM