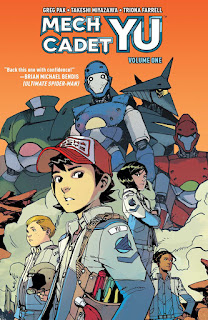 
A young boy gets the opportunity of a lifetime when he bonds with a giant sentient robot and joins the ranks of the illustrious Sky Corps Academy to protect the world from alien threats.

Every year, giant sentient robots from outer space come to Earth and bond forever with a brand new crop of cadets at Sky Corps Academy to help keep the planet safe. But this year, instead of making a connection with a cadet, one of the mechs bonds with Stanford, a young kid working with his Mom as a janitor at Sky Corps. Stanford has the opportunity of a lifetime but he’ll first have to earn the trust of his classmates if he’s to defend the planet from the monstrous Sharg.

From bestselling author Greg Pak (The Hulk, Superman) and fan favorite artist Takeshi Miyazawa (Runaways, Ms. Marvel), Mech Cadet Yu is a heartfelt underdog story set in a bright and bold sci fi world, uncovering the true makings of heroism and friendship in the face of overwhelming odds. This collection includes an exclusive behind-the-scenes look at the making of Mech Cadet Yu, including the comic short story that inspired the series.

More or less the love child of Pacific Rim and The Iron Giant, Mech Cadet Yu is a fun book that I found myself enjoying more and more thru each chapter. For the last sixty years, every four years giant Mechs fall from the sky and bond with a young child and thru that bond and the training the young cadet has gone thru, they become a champion of the human race against the alien threat of the Sharg. No one knows where the Mechs come from and no one knows how they choose the child they bond with, but they have become the front line defense for the human race. In the most recent bonding, one of the Mechs chooses Standford Yu, the son of a janitor at Sky Corps, who has had no experience or training to be a Mech pilot/companion but because the Mech has chosen him, he is thrown immediately into training.

There is the inevitable rivalry between Yu and the daughter of the program director who has supposed to bond with the third Mech and is instead given the first human-built Mech (which reminds me very much stylistically of the Evangelion mechs), and of course they are immediately thrown into a battle with the Sharg when no one is prepared for this since they are still first year cadets, and of course they win this battle; to be fair, the entire story is and of itself a very simple heroes journey, and one that we've all read before. However, Greg Pak's writing really brings some heart and soul to both the cadets and their Mechs and the whole thing just feels fresh in a very nostalgic way. Takeshi Miyazawa's art is dynamic and his Mech designs are both intimidating and friendly; these are robots that can kick ass and be your best friend.

I am pleasantly surprised by how much I enjoyed this initial volume and am looking forward to reading more of Yu's adventures.
Posted by tapestry100 at 5:00 AM