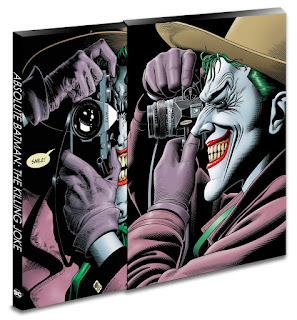 
One bad day. Freed once again from the confines of Arkham Asylum, The Joker is out to prove a deranged point. And he's going to use Gotham City's top cop, commissioner Jim Gordon, and his brilliant daughter Barbara (a.k.a. Batgirl) to do it. Now Batman must race to stop his archnemesis before his reign of terror claims two of the Dark Knight's closest friends.

Critically acclaimed writer Alan Moore redefined the superhero with Watchmen and V for Vendetta. In Batman: The Killing Joke, he takes on the origin of comics' greatest super-villain, The Joker, and changes Batman's world forever.

Absolute Batman: The Killing Joke: 30th Anniversary Edition includes both the recolored art by artist Brian Bolland and the original colors by John Higgins, along with the never-before-published scripts, and numerous Batman and Joker sketches and stories by Bolland.

Even going into this new 35th Anniversary Absolute edition of Batman: The Killing Joke knowing there wasn't much new here to flesh out an entire Absolute offering, the redundancy was overwhelmingly obvious when I finally got the volume in hand and read it thru. Including the various covers and pinups attached to the series was a nice addition, the script was interesting to flip thru, and the additional short stories from other volumes helped fill out the volume, but basically running the entire story 3 times in a row in one volume (the new recolored edition on better paper, the original colored edition on basically newsprint, and then the script) was a little overkill for me. Don't get me wrong, like all of DC's Absolute editions, this is an impressive volume, but unless you are a serious hardcore The Killing Joke fan, skip this for one of the cheaper editions available. (Normally, I give this book a 4 star rating, but the redundancy of this project dropped this particular volume down a star.)
Posted by tapestry100 at 5:00 AM