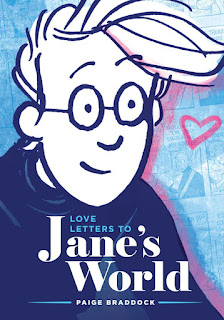 
This essential Jane's World collection debuts twenty years after Jane Wyatt first appeared in Paige Braddock's trailblazing comics strip about a young lesbian woman making her clumsy way in the world and the friends who help (or hinder) her along the journey. The Eisner-nominated Jane's World was the first syndicated comic strip with a lesbian main character to appear in many major newspaper markets. This new volume collects the most quintessentially "Jane" storylines from the strip's early, middle, and later years, and pairs them with "love letters" and notes of appreciation from notable fans.

Love Letters to Jane's World by Paige Braddock, who created the first syndicated comic to feature a lesbian main character, is a funny, goofy book with a ridiculously likeable cast of characters that I found myself enjoying more and more as I read about them. While not a progressive series of stories from the comic, this is more of a "greatest hits" collection of Jane & Co's shenanigans, paired with "love letters" from fans. I'm going to have to find Jane's World either online or in print and read this in order. It's a gem of a fun story.

I received an eARC of this title from NetGalley in exchange for a free and honest review.
Posted by tapestry100 at 5:00 AM