All Systems Red: The Murderbot Diaries by Martha Wells 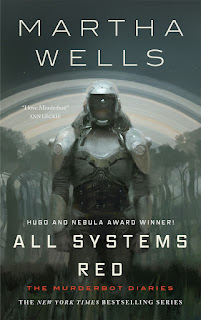 "As a heartless killing machine, I was a complete failure."

In a corporate-dominated spacefaring future, planetary missions must be approved and supplied by the Company. Exploratory teams are accompanied by Company-supplied security androids, for their own safety.

But in a society where contracts are awarded to the lowest bidder, safety isn’t a primary concern.

On a distant planet, a team of scientists are conducting surface tests, shadowed by their Company-supplied ‘droid―a self-aware SecUnit that has hacked its own governor module, and refers to itself (though never out loud) as “Murderbot.” Scornful of humans, all it really wants is to be left alone long enough to figure out who it is.

But when a neighboring mission goes dark, it's up to the scientists and their Murderbot to get to the truth.

Another fantastic series from Tor.Com Publishing, Martha Wells' Murderbot turns out to be one of the most human characters you'll find. Basically a cyborg constructed to be a Security Unit (SecUnit) who has hacked its governor unit and is now rogue and self-aware, tho no one knows it, Murderbot continues doing its job because it really has nothing better to do. Assigned to protect the members of a scientific exploratory mission, Murderbot wants nothing better than to be left alone when not needed so that it can watch the hours of entertainment it has downloaded. However, when a fellow mission goes silent, the team decides to investigate and Murderbot decides to protect them (even tho it has advised against the investigation) because, to its surprise, it is beginning to care for the well-being of its crew. Eventually it becomes clear to the crew that Murderbot is rogue and self-aware and as they come to terms with that knowledge, Murderbot needs to keep its crew alive as someone seems to be out to kill them.

All Systems Red is a fast-paced scifi with a murder mystery undertone that is wildly satisfying. Wells strips away all the extraneous details that usually bog down scifi novels for me and just gives us exactly what we need to know to keep the story moving, and not much more. This also helps put us in the frame of mind of Murderbot, as it doesn't really care what's really going on around it, it just wants to watch TV. It is Murderbot's struggles with itself, wanting to know what it is and what its future holds, that makes this book so amazing. Through the experiences and wants and needs of an artificial being, we see what it means to be human. It doesn't seem like this should be something that would be easy to convey, yet Wells does it with ease, adding in a little bit of humor along the way. The Murderbot Diaries should be on your TBR list if it isn't already.
Posted by tapestry100 at 5:00 AM